Student and genocide survivor invited to the UN 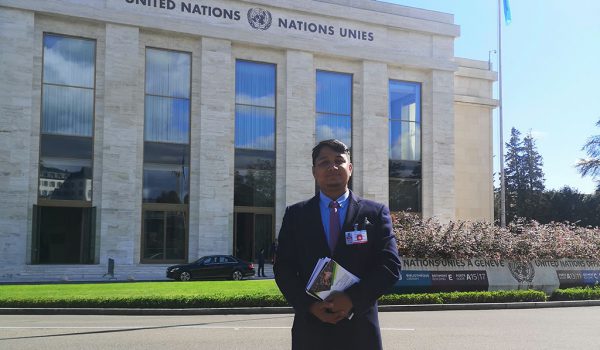 For most students, time management involves dividing time between all-important coursework and leaving plenty of room for socialising. But for Leadership and Management student, Nijam Uddin Mohammed, his time is divided between studying his degree at University Centre Leeds, speaking on stage about the Rohingya genocide in Myanmar (previously known as Burma) and campaigning for formal education for refugee children.

Most recently, Nijam was invited to speak at the United Nations’, to talk about his experience as a genocide survivor, the terrible trials and tribulations for the Rohingya people at the hands of the Burmese military and why formal education for refugee children is so important.

We caught up with Nijam to find out about his studies at University Centre Leeds, his involvement with the British Rohingya community and his visit to the UN.

A degree that makes a difference

Nijam says: “I chose the Leadership and Management Foundation Degree as I have been in business for a long time and I realised that I need a degree to be successful. The second reason for choosing this course is that I am a community leader. I have held various positions in organisations and I am currently the General Secretary of the British Rohingya community.

“So when I saw the advertisement for the Leadership and Management Foundation Degree course, it clicked that I can learn and use these skills for my business and for the community as well.”

The Rohingya genocide
The Rohingya crisis is well documented by Human Rights organisations, however, awareness of the true horrors of ethnic cleansing and systematic genocide is still lower than it should be. According to Human Rights Watch, since late August 2017, more than 671,000 Rohingya muslims have fled Burma’s Rakhine State to escape the military’s large-scale campaign of ethnic cleansing.

The atrocities by the Burmese military have included mass killings, sexual violence and widespread arson. Though the military claims that they only target Rohingya military, innocent civilians are either slaughtered or rendered stateless.

“They say that we are the illegal immigants but that is not true, because our skin colour and religion is different, they want us to die. They have carried out many operations to wipe us out of the country,” Nijam explains.

“More than 70 of my family members have been killed by the Burmese military. In 2017, my cousin’s brother was shot by the military just for fun, he was just 11 years old. Since 2017, in my country more than 350 villages have been burned down including my village. Thousands of people are being killed and raped by the Burmese military. In the refugee camps, women are giving birth to their rapists’ children,” he adds.

Nijam’s family fled Burma in 1992, he spent 18 years in a refugee camp and when he came to the UK was astonished that nobody seemed to know about the events in Burma. The reason? A media blackout to ensure the Rohingya’s plight remained unreported.

“I spent 18 years in the refugee camp, I grew up there and while I was there, I didn’t know what it meant to be alive. I came to the UK and started to feel like part of the human race. The refugee camp is like a mini prison, everything is limited, you have a small room, no kitchen, no privacy, no different food. When I came to this country I knew I needed to tell my story,” says Nijam.

A mission to educate young refugees
As founding General Secretary for the British Rohingya community, Nijam communicates with community leaders, politicians and community members. The organisation sends speakers all around the country to raise awareness. As part of this, Nijam has organised meetings with politicians and ministers.

The Turkish Foreign Minister, former UK Foreign Secretary and UK Labour Party leader are just some of the famous and influential figures Nijam has met with in a bid to raise awareness about the Rohingya crisis while campaigning for education.

“I used to work as a teaching assistant but I left my job to focus on my community. For the last seven years, I’ve always worked at night so in the day I can do my community work,” he explains.

“We work together with the United Nations High Commissioner for Refugees (UNHCR), National Education Union, UK Aid and more. We want to raise awareness about what is going on in our community because when we came here, nobody knew the difficulties people were facing in their own country.

“Now our mission is about education. Since 2017, more than 800,000 people crossed to Bangladesh and became refugees but these people had no formal education. We want to give education to the refugee children. If you educate the children they can be an asset to any country. Refugee children all over the world deserve education because it’s not their fault, it’s the politicians’ fault who have made them become refugees,” Nijam says.

United Nations and beyond
“The UN invited me to speak, they invited people from each continent and I represented all of Europe and the stateless. When I was in the refugee camp I used to dream about going to the UN one day.

“I spoke about education and statelessness. Nobody should accept statelessness and everyone should belong somewhere. I didn’t want to leave my country and my belongings, but I didn’t have a choice because it’s not safe,” Nijam explains.

Nijam has poured so much into the British Rohingya community that he now considers the success of the community his own achievements as well. He explains how the community is having an impact in securing education for young refugees.

“My achievements are the same as the British Rohingya community, we wanted people to know where we are from and what we have suffered, now everybody knows so this is a big success. We are trying to get formal education for child refugees and the National Education Union has agreed to do a formal assessment on the refugee camps in Bangladesh. This will be the first time in history an organisation has agreed to assess formal education in refugee camps.

“According to other organisations, there are more than 400,000 Rohingya child refugees. If they don’t get education, bad people can trap them in human trafficking or they can be forced into prostitution or easily radicalised. To stop these things, we need to educate the children so they can learn right and wrong. We met with UK Aid and requested they only spend money on formal education as non-formal education is not recognised by every country,” Nijam says.

And when asked about his own education and graduation? Nijam can’t help but smile as he talks about his brother with pride. Education was very restricted for Rohingya muslims so Nijam and his brother will be the first to graduate.

“My younger brother came to this country not knowing any English, he took the admission to year three and when he did GCSEs he got four A stars, his A levels were very good as well.”

“Look at Jasmine Akhtar, she’s a Rohingya refugee who resettled from a refugee camp to the UK. She was chosen as the captain of the England team in the Street Child Cricket World Cup and was listed in the BBC’s 100 influential women 2019. She’s proof that if you give someone the opportunity, they can be an asset to your country.”

The future is bright for Nijam
Nijam has ambitious plans for his future, he plans on continuing his work for the British Rohingya community and fighting for formal education for refugee children. In addition, he plans on completing his degree and using what he learns from his degree for his business and community.

Nijam was drawn to Leeds due to its friendly culture and a recommendation from a friend. He has had a great experience so far and is extremely grateful to University Centre Leeds for all of its support so far.

He says: “When I came for my first interview, University Centre Leeds staff were very friendly. Whenever I needed anything, my tutors and team leaders were always helpful regardless of the reason.

“I’m really grateful to Leeds City College and University Centre Leeds for giving me the chance to do a degree. I’ve had great dreams all of my life to do a degree and without their help I wouldn’t be here today.”