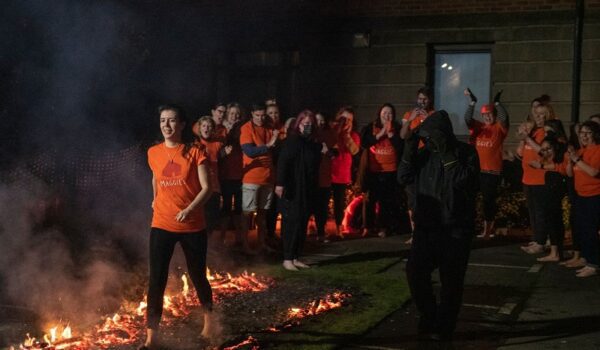 Ben has been using his camera skills to support a number of charities, including the RSPCA and Leeds Hospitals Charity, while studying for his BA (Hons) Photography at University Centre Leeds.

Most recently he put his talent to good use for Maggie’s Yorkshire, when he got up close to a bed of burning coals to take publicity shots for a fundraising firewalk.

A keen photographer since he was a teenager, Ben enjoyed some newspaper competition success in Oxford before moving to Leeds where, at a loose end, he started volunteering for the RSPCA.

It was while working for the charity’s Leeds, Wakefield and District branch that he got a chance to photograph the animals who were up for adoption, and began thinking of taking his hobby further.

Setting sights on a career

He said: “My photography with the RSPCA was getting noticed more and I then started photographing their events, so this is when I thought about becoming professional.”

Inspired to start his own business, he went on to produce a website and Facebook page, and then approached University Centre Leeds.

He said: “I felt I needed more experience so I found a contact for Matthew Smith, my tutor, and gained an interview for the BA photography degree.

“Both Matt and Tom Poultney, the Head of HE Creative Arts, liked my website and the quality of work I was producing, so I was accepted onto the course.”

With some time to kill before the start of his University Centre studies, Ben paid for a ten-day studio photography course which turned out to be a very wise investment.

He said: “This sparked an idea for my work with the RSPCA, to run a studio session at the centre for a fee that could be split 50/50 with the charity.

“The studio sessions were a huge success and are fully booked the majority of the time – I have been running them for three years now!”

Ben’s links with the RSPCA also led him to adopting his dog, Cai, who features prominently  on Ben’s website.

An amazing volunteer and brilliant photographer

He got in touch with cancer support charity Maggie’s, meanwhile – who he is hoping to work with again on future events – through UC Leeds’ Corporate Social Responsibility Project Coordinator, Millie Bolt.

Millie said: “Ben has been absolutely amazing with his willingness and keenness for volunteering at charity events and functions.

“Even though he leads a busy life with work, study, and looking after his little girl, he is always asking if there’s anything else he can help out with.

“The shots he gets are of brilliant quality which we use for social media, and he’s also just a pleasure to work with on a personal level.”

Now in the final year of his course, Ben has his sights set on a career as a documentary/commercial photographer specialising in the science and technology sector.

He said: “For my final project I have been documenting Leeds University Rocketry Association. It has been a fantastic experience and I have really enjoyed working with the team.”

Details on Ben’s forthcoming Pet Photoshoots for the RSPCA can be found here.