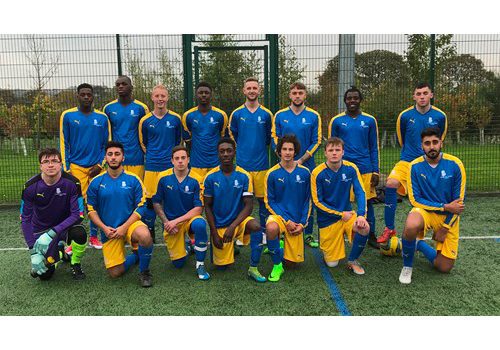 The first game of the season in the BUCS Northern 7B saw the newly formed LCC University FC take the short trip to Leeds Trinity to play their 4th team. The lads had trained hard leading up to this point and were eager to get the campaign up and running with captain Kingston David (BA Sports Coaching Top Up) leading a confident side onto the pitch.

The game had a tense start with LCC dominating possession however failing to convert the territorial advantage into goals with some evidence of the team needing minutes together on the pitch to continue to gel as a team.

The introduction of Kabine Dumbuya (FdA Sports Coaching year 2) and Clinton Oguwuike (FdA Sports Coaching year 2) saw the team add an extra dimension to their game with some powerful running. This proved too much for the Trinity defence as LCC opened their account with a finesse finish from the edge of the box by captain Kingston before Kabine confidently rounded the keeper and also fired home from just inside the box to make it 3-0 at half time.

Half-time’s team talk by Kingston focused around not becoming complacent and ensuring a clean sheet was maintained. Unfortunately within minutes of the restart two individual errors in defence led to Trinity clawing two goals back to make it 3-2.

During this phase of play, an injury to Emmanuel Osikorobia (FD Sports Coaching year 1) forced him to leave the field breaking the dominant centre defensive partnership he had formed with Lucas Clayden (BA Sports Coaching Top-Up) leading to a reshuffle at the back. LCC showed grit and resillience to come back from this setback to add a further two goals through Kingston and Kabine to make it 5-2 which it would end meaning a winning start to the campaign.